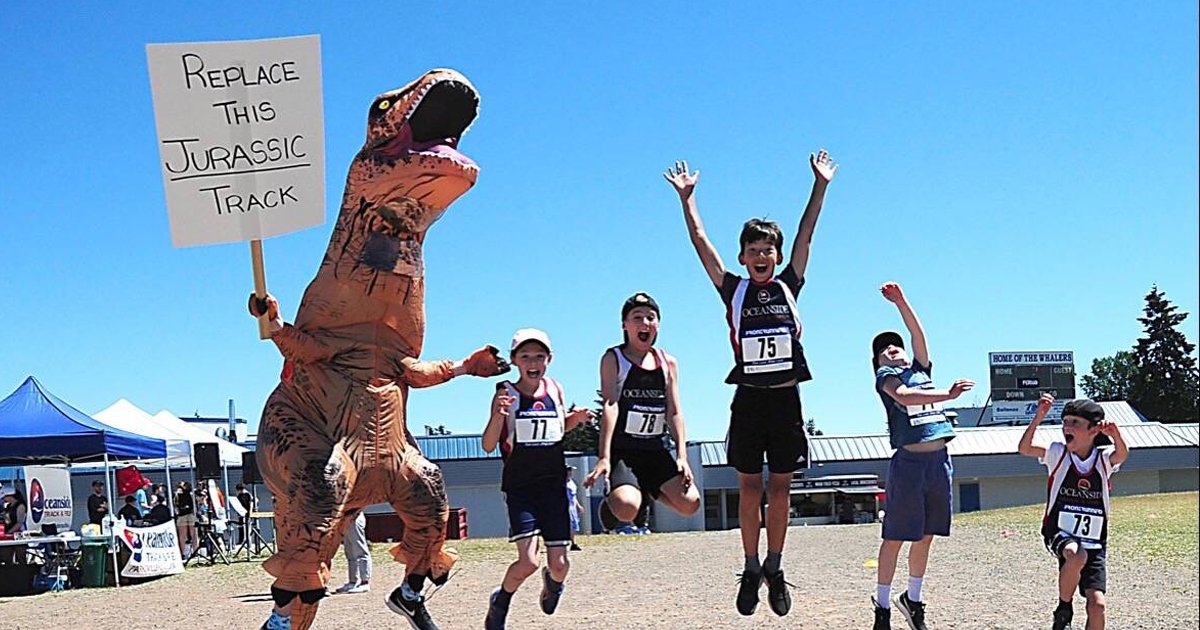 The Ballenas Secondary’s old cinder track may have held its last big event in its current state of disrepair.

A Community Love Run, organized by the Oceanside Track and Field Club, was held on a sunny Sunday afternoon, June 26 in partnership with the the Oceanside Community Track Society, the group leading a fundraiser for the $1.5-million project that would see the old facility upgraded into a six-lane, all-season rubberized track.

The event drew 150 eager participants, young and old, who collectively walked and ran 755 laps around the old track to raise funds for the project. Organizers had a man in a T-Rex costume bearing a poster saying ‘Replace this Jurassic Track.’ They covered a total of 302 kilometres in one hour and generated a total of $20,000.

The largest individual fundraiser was nine-year-old Thomas Luksay, who completed 16 laps or 6.4 kilometres and raised $1,000 with more pledges to come.

The youngest runner was six-year-old Jordie Aikman-Heir who completed four laps while the oldest participants were Dick and Doreen Hampton, who are in their 80s, Jess Brewer, 76, and Terri Riggins, 75.

One of the highlights of the run was the opportunity to get local government officials from the City of Parksville, Town of Qualicum Beach and Regional District of Nanaimo to walk around the track and experience the poor state of the course.

Parksville Mayor Ed Mayne was asked by students of Ballenas what he thought of the track after walking a lap.

“If you wouldn’t have told me it was a track, I’d have a hard time knowing it was a track,” said Mayne. “It’s pretty deplorable. There’s no excuse for it to be in this condition. And yes, I do support this.”

Qualicum Beach Mayor Brian Wiese pointed out how uneven and unsafe some of the areas of the track are at this point.

The President of the Oceanside Community Track Society, Elaine Young, also a School District 69 trustee, strongly supports the track upgrade. With Team Red, Young walked a minimum of three hours a day for six months to fund raise for the track.

“So I am personally very committed to this track,” said Young. “I have been ever since I moved to (PQB) and got fit myself. I used to weigh a hundred pounds more than I weigh today. And so it’s my personal commitment as well as political commitment as a school trustee to get this track built within the next year.”

The SD69 school board recently approved a motion to put a tender for a general contractor/project manager to help organize and gather donations in-kind from various contractors.

Of the many donations received during the Community Love Run, Home Hardware Central Builders chipped in one of the biggest amounts, $5,000, with the goal of encouraging and motivating other businesses to match their contribution.

The goal is to raise $1.5 million to cover the construction of the track and also for maintenance and other incidental costs.